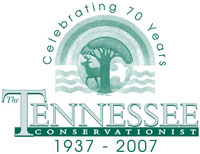 Published six times a year, The TENNESSEE CONSERVATIONIST is dedicated to promoting the mission of the Tennessee Department of Environment and Conservation to preserve, protect and wisely use the state's natural and cultural resources.

Subscriptions are $15 for one year; $22 for two years; $30 for three years.
Phil Bredesen
Governor

May/June 2008 - "The Nesting Birds of the Roan Mountain Highlands" by Allan J. Trently

January/February 2008 - "Lost History and Legend Along the Warriors’ Path" by Jeremy B. Stout

November/December 2007 - "You Can Become a Household Partner in the Tennessee Pollution Prevention Program We Did!" by Donovan Grimwood

September/October 2007- "The Naturalist’s Trail: John Muir and His Trek Through the Mountains of East Tennessee" by Quentin R. Bass II

November/December 2004 - "Mound Bottom: Shrouded in Mystery and Mist" by By Randy Vincent and LinnAnn Welch

September/October 2004 - "Conrad Jamison Jr.: The Brief Life of a Tennessee Naturalist" by Roger A. McCoy and Thorunn A. McCoy

January/February 2004 - Persons who watch and listen can take in a lot of nature in the stillness of winter. Tennessee State Parks' Biologist LinnAnn Welch, formerly a naturalist at Radnor Lake State Natural Area, offers readers a chance to sample the delights of winter in her article, "The Winter Woods,"

November/December 2003 - "Revisiting Our Civil War Legacies: Tennessee State Parks and the Tennessee Civil War National Heritage Area" by Carroll Van West. In the article, West explains how the program is particularly interested in focusing programming and conservation efforts at neglected resources associated with wartime occupation and the later social and political reconstruction of the state.

September/October 2003 - South Cumberland State Recreation Area celebrates 30 years this year. That's 30 years of habitat protection for the rare Cumberland Rosinweed, the endangered Tennessee Cave Salamander, the tiny Hooded Warbler, the massive Yellow Poplars of the old growth forests, and more. It's also years of wilderness experience for hikers, backpackers and birds, and anyone hankering for "the tonic of the wilderness" as Henry David Thoreau called it. "South Cumberland State Recreation Area: A Tennessee Treasure Turns 30" was written by Mary Patten Priestley, curator of the Sewanee Herbarium and a member of the Friends of South Cumberland.

July/August 2003 - Visitors to the Ocoee River come from all walks of life and have skill levels from beginning rafter to advanced boater. River users can paddle the river knowing that the Hiwassee and Ocoee Rivers State Park staff is looking out for their safety. This issue's featured article, "Ocoee Paddlers Helped By Park Staff," was written by Ann Rymer. She lives due west of Ducktown and is a nurse anesthetist.

May/June 2003 - A visit to the Carter Mansion in Elizbethton, which was constructed between 1775 and 1780, can provide fascinating information and insight into the history, experiences and the memories of those who called the grounds their home. It can also be a reminder of a time when running to the store to pick up a loaf of bread was not an option. Instead, survival was the dominant theme in the day-to-day lives of the settlers. "If you chose to eat, you would need to raise a vegetable garden, hunt and engage in the preservation of foods for the fall, winter and spring months," writes Jennifer Bauer, park interpretive specialist for the Sycamore Shoals State Historic Area and the Carter Mansion. Bauer, a frequent contributor to The Tennessee Conservationist Magazine and author of Roan Mountain: A Passage of Time, tells the story of the "Unique Tennessee History Preserved at the Carter Mansion." This article is the featured article for the May/June 2003 web site for The Tennessee Conservationist.

March/April 2003 - It would be difficult to envision a world without the colors and fragrances of springtime. "Spring is the time of year most often associated with renewal and rebirth," Randy Vincent and LinnAnn Welch remind us in their article, "The Significance of Flowering Plants," a reflection on the brilliant displays of nature's bouquets.

January/February 2003 - James Widlak, endangered species consultation coordinator with the U.S. Fish and Wildlife Service Tennessee-Kentucky Field Office in Cookeville, writes about "30 Years of Endangered Species Conservation in Tennessee," the featured article for this issue of The Tennessee Conservationist.

November/December 2002 - Roan Mountain is known for being home to many rare, endemic plant and animal species like the Spruce/Fir Moss Spider, Northern Saw-Whet Owl and Northern Flying Squirrel. In the article "Research on the Roan," Jennifer Bauer, a Tennessee State Parks interpretive specialist at Sycamore Shoals Historic Area in Elizabethton, highlights research underway on Roan Mountain.

July/August 2002 - The area that is now Long Hunter State Park, located on the shores of J. Percy Priest Lake in the Hermitage area, was named for the long hunters that explored there in 1767. Today, it is home to two federally endangered species: Tennessee Purple Coneflower and Leafy Prairie Clover. In the article "A Look at Long Hunter's History," John Froeschauer, interpretive specialist at Long Hunter State Park, takes a look at the park's history.

May/June 2002 - "The Duck River is Tennessee's Newest Designated State Scenic River" was written by Reggie Reeves, director of the Tennessee Department of Environment and Conservation's Division of Natural Heritage.

March/April 2002 - David England of Winchester is nonplussed when unexpected dinner guests at his home turn out to be young bobcats requiring bottle feeding every few hours; it's part of his gig as a licensed wildlife rehabilitator. England, whose regular job is working as a Tennessee State Park Ranger at Tims Ford State Park in Winchester, has been a Tennessee Wildlife Resources Agency (TWRA)-licensed wildlife rehabilitator for the past 12 years. In this issue of The Tennessee Conservationist, he shares his experiences with wildlife in an article by Editor Louise Zepp entitled "Park Ranger Rehabilitates Wildlife,"

November/December 2001 - This year's 30th anniversary of the Natural Areas Act provides an opportunity to appreciate Tennessee's treasures that the act protects, while recognizing how much more needs to be done to preserve the best of the rest. Brian Bowen, natural areas administrator for the Tennessee Department of Environment and Conservation's Division of Natural Heritage, takes a look at the anniversary of the act and what it protects. His article "Natural Areas Act Turns 30" is the featured article on the Conservationist's Web page for the November/December 2001 issue.

July/August 2001 - Bob Fulcher, interpretive specialist for the Cumberland Trail State Park, writes about this scenic spot on the Cumberland Plateau in "Black Mountain: Rags and Riches,"

May/June 2001 - Have you visited Pickett State Park during the early summer weeks and heard of the intriguing blue lights that glow all night in front of Hazard Cave?

January/February 2001 - Zoologist David Ian Withers, who works with the Division of Natural Heritage, gives the scoop on winter activities by creatures great and small in the article "Tennessee Creatures Tackle Old Man Winter," the featured article on the Web page for the January/February 2001 issue of The Tennessee Conservationist.

September/October 2000 - Land trusts, private nonprofit organizations that work with landowners to conserve land, have existed in New England for over 100 years but are relatively new to Tennessee. Check in with some land trusts around the state to see what's underway with their efforts to promote land conservation.

May/June 2000 - Flowers are advertisements armed with reproductive equipment. "The Meaning of Flowers,"

March/April 2000 - David Ian Withers, zoologist with the Tennessee Department of Environment and Conservation’s Division of Natural Heritage, reports on the history of starlings in the article "Origins of the European Starling in the United States," this issue’s featured article on The Tennessee Conservationist Magazine’s Web page.

January/February 2000 - Bob Fulcher, a regional interpretive specialist with Tennessee State Parks, tells how a bird in hand can be just that in his story "A Bird in the Hand … Confessions of A Bird Man."

November/December 1999 - Check out Bob Fulcher’s article "Tennessee’s High Points" and check in with the "peakbaggers."

September/October 1999 - Andrea Brewer Shea, writer of "The Return of Native Grasses to Tennessee," describes which native grasses to select for landscaping.

July/August 1999 - Stone Masonry Links Past and Present at Pickett,"

May/June 1999-... The word "scorpions" usually brings to mind the desert, not a scene of Tennessee, but scorpions do live in the Volunteer State. Their home and habits are considered in the story "Did Someone Say Scorpions?" .  The scorpion article was written by Patricia Dobbe, biologist for the Tennessee Department of Health’s Environmental Laboratory Service/ Aquatic Biology Section in Nashville and is featured on our Web page for May/June 1999.

September/October 1998 - "Muir, Michaux and Gray on the Roan," - unpublished letter written by John Muir, the greatest proponent of wildness since Thoreau. Muir wrote to his wife, Louie, from the Cloudland Hotel on the Roan summit. Muir, Andre Michaux and Asa Gray led the search for Roan Mountain’s unknown biological treasures.

July/August 1998 - Fire breathers, magic, puppet shows and conjurers were all the rage at 18th century "trade faires." This fall, you can take a trip to the past by visiting Fort Loudoun State Historic Area in Vonore on Sept. 12-13 for the 18th Century
Trade Faire.

March/April 1998 - AWARD WINNING ARTICLE - The winning article "Weeds: Why Are They Here?" appeared in the March/April 1998 issue and was written by Andrea Brewer Shea. The focus of the article was to educate people about what they may see and touch on a daily basis in their own backyard and to offer them a better understanding of the larger natural world. Discovering more about what weeds are, and how they may have arrived in Tennessee, is a part of that education.

December, 1997 - Myths and Lore of Mistletoe